Back to all posts

First off, I want to say that I am excited about the ALL the shows I have upcoming. March is a special month! Here are the highlights:

Tue. the 22nd - playing WDVX's Blue Plate Special in Knoxville, TN. That is an AWESOME show (aired live) with a long history of top notch performers. So excited!

Sat. the 26th - playing the Hillbilly Haiku House Concert series in Lebanon, TN. Just Google them, if you're in the area, to purchase a ticket. Nice folks!

Tue. the 29th - playing the legendary TIN PAN SOUTH FESTIVAL!!! "Donnaroo: Donna Beasley & Friends of Note." I am honored to share the stage with Jim Lauderdale, Elizabeth Cook, and Tim Carroll. Below you will find a little biographical information on all three. I encourage you to visit their websites, purchase their cds, attend their shows...support these phenomenal artists!

Jim is a two time Grammy winning artist and among Nashville's "A" list of songwriters, with songs recorded by artists such as: Patty Loveless, George Jones, The Dixie Chicks, Solomon Burke, Mark Chesnutt, Dave Edmunds, John Mayall, Kathy Mattea, Lee Ann Womack, Gary Allan, Blake Shelton. Vince Gill, George Strait, and Elvis Costello. Jim has toured with Costello as a member of his band, The Sugarcanes, and is currently touring in support of his critically acclaimed 2010 release, "Patchwork River."

Tim Carroll
"Tim Carroll is a songwriter who blends intelligence, humor and aggression into something wholly idiosyncratic and tremendously entertaining," (Peter Cooper, The Tennessean). Tim has had songs recorded by John Prine, Asleep At The Wheel, BR-549, Robbie Fulks, Kasey Chambers, Bobby Bare, Jr., Sunny Sweeney, Sonny Burgess, and Elizabeth Cook. Jersey Beat described Tim's latest release, "All Kinds Of Pain," as " a 'wow' listen...just so good and so full of amazing music...this has to be in my top picks of 2010." Tim is currently on tour with Elizabeth Cook. 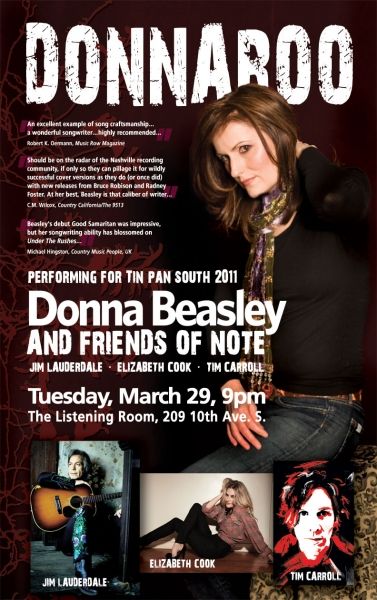