Back to all posts

Sorry for the lateness of the post. There have been floods and CDs to contend with. And these issues needed a little time. After some rumination, here's what I took away from my pilgrimage to Graceland, April 27, 2010.

1. Elvis lived a long time ago, not yesterday, as the videos have a way of making you believe. Watch "That's the Way It Is" filmed in 1970. You would swear you could drive over to rehearsals at MGM Studio and crash in on the Sweet Inspirations and the Imperials working out bgv's for "Bridge Over Troubled Water." It's easier to believe that the concert takes place in some sort of parallel universe where women wear really strange hair rather than the fact it was more than 40 years ago. A reviewer on Amazon commented, "It's so fresh and alive you'll almost forget it wasn't recently filmed." Thank you.

So, that's the little Elvis bubble I'd been living in for about a year. Happily melding 1970/2010. Elvis and I look good. We're thin. We're happy. We're young. We're bff. And then I saw the limo...THE limo...the one from "Elvis On Tour" filmed in 1972. He climbs in, entourage in tow, looks out the window sadly and sings "It's a rainy night in Georgia." Man, that limo is OLD. And tiny, compared to the monstrosities high school grads are renting for prom night these days. That tiny limo became "Christine," from Stephen King lore. It turned the key, started itself up, and plowed right into my little 1970/2010 bubble.

2. Once, when living in Pensacola, I ran into boxing champ Roy Jones, Jr., and his entourage, at the all-night Kroger about 1:00am. By that point in his career, he had won the title of World Champion in 3 weight divisions. And there he was in the Kroger. The second thing I realized after visiting Graceland is that I'm never going to run into Elvis in the all-night Kroger. And I'm never going to see him in concert. 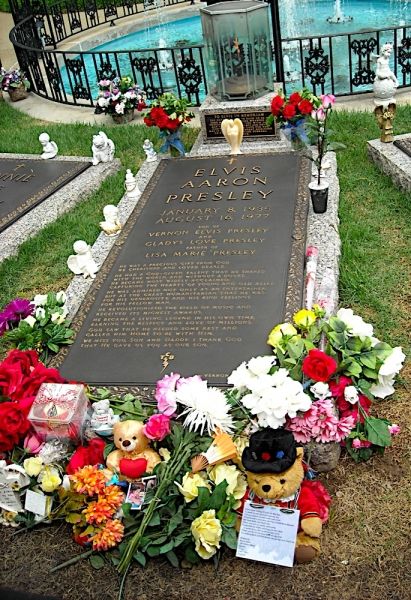